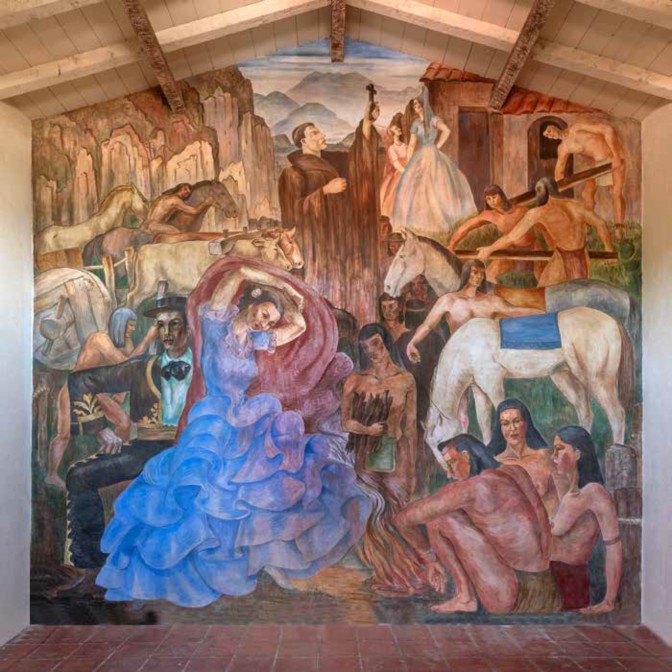 Visitors entering the museum of the Ramona Bowl Amphitheater in Hemet, California are treated to the view of an impressive fresco honoring the Ramona pageant, California’s official State Outdoor Play. It was created by artist Milford Zornes and a small, dedicated group of his students.

Zornes’ fresco is, in essence, a wondrous illustrated book, always open and available to all.

“The iconography of this piece is truly unique. The fresco is a beautiful pictorial description of the novel Ramona , written by Helen Hunt Jackson in 1884. Tradition- ally, large-scale frescos represent religious subjects. One of the functions frescos served in antiquity was to describe or teach a story or specific event—almost always religious in nature—using images as opposed to words, because the majority of people were unable to read.” 1

For many years the view of the sixteen- by eighteen-foot fresco was obscured by a stairway, a balcony, layers of white paint, and a board bolted to the wall, all installed since the art was completed in 1943. The fresco was almost lost due to age and construction damage.

Work on the fresco under way by the team of artists.

Thanks to a donation from the estate of Hemet residents James and Marilyn Latham, and the efforts of the Hemet community under the leadership of Lori Vanarsdale, significant changes were made to the building and this historic fresco has received a conservation treatment by fresco specialists Ilia Anossov and Elisabetta Perfetti.

The story of the Ramona fresco began in 1941, when Otis Art Institute in Los Angeles announced that a team of their students, selected and led by award winning artist and Institute teacher Milford Zornes, would create a thematic fresco at the Ramona Bowl. Zornes had already completed two WPA murals; one in Claremont, California and one in El Campo, Texas. Over the course of a lifetime, Milford Zornes was recognized largely for his watercolor paintings and was one of the United States’ official artist of World War II in the China-Burma-India Theater of Operation. He taught painting at several institutions including Pomona College, Otis Art Institute, and Pasadena School of Fine Arts. He and his students painted through- out the world.

The team used the Italian buon fresco technique, in which pigments are applied to wet plaster and become a part of the plaster rather than paint on top of plaster. They applied just enough plaster to the wall – approximately four feet square – that they could paint in one day. At the end of the day any excess was removed. The next day the same process was used except that the new section carefully overlapped the section done the day before for a seamless result. The entire process took about six weeks. During that time they stayed in a house on a local Indian reservation and Pat Palmer’s mother often supplied food.

“In the Ramona fresco we find the medium’s communicative power on full dis- play, but there is innovation in the subject. Milford Zornes’ work is a pictorial representation of something more unique than rare: a type of visual summation of a novel.”

Though the fresco was completed in summer 1942, the world was to wait another year to see it because the Ramona Pageant season was cancelled that year due to World War II.

In 2013, an event at the Ramona Bowl began to educate the public about the fresco. Among those in attendance were Otis School of Art and Design Alumni Director Laura Daroca, iLia Anossov of the Fresco School, artist and gallery owner Bill Anderson, the director of the Riverside Art Museum, Gene Sasse of the Sasse Museum of Art, and local newspaper representatives.

During the presentation, Anossov described the fresco as a “national treasure”, said its cultural value is impossible to overestimate, and put its monetary value at $2.5 million. He said that the rarity of the true fresco in present time makes its preservation paramount for our culture.

Conservationists iLia Anossov and Elisabetta Perfetti painstakingly removed several layers of white paint that covered sixteen by three-and-a-half feet of the fresco, filled scratches and bolt-holes left from a board mounted to the wall, carefully matched the paint on the damaged portions, and gently over-painted age-damaged sections as necessary. By mid-March 2020, the conservation was complete.

Milford Zornes’ son-in-law and biographer Hal Baker, speaking for himself and his wife Maria says, “This project has been very important to Maria and I. We think that Pat and Milford would be very happy with the end result. Certainly we are.”

The Ramona pageant soon celebrates 100 years since its first performance in 1923. Visitors and pageant attendees will again have an opportunity to appreciate this historic work of art as it was first completed by Milford Zornes and his dedicated students in 1943. 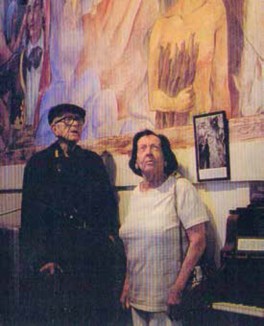 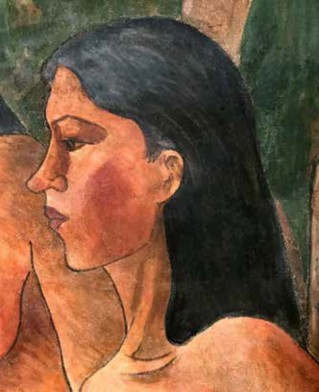 After detail of the restoration. 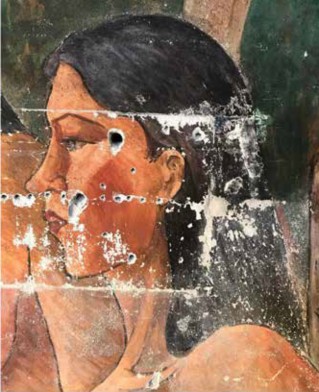 Before detail of the restoration. 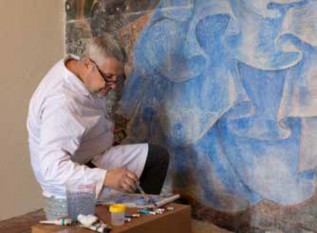 iLia Anossov working on the restoration of the fresco.

Elisabetta Perfetti working on the restoration of the fresco. 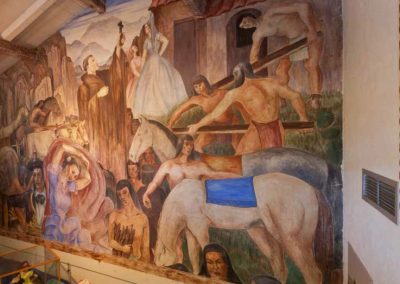 The fresco before restoration showing the rail attached and the bottom third painted over. 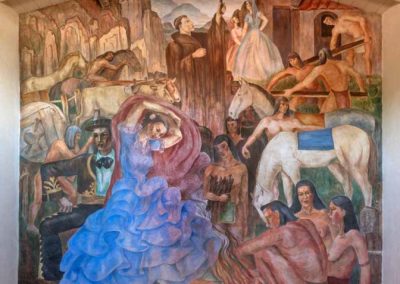 The restoration completed on the fresco. Ramona Pageant Fresco by Gene Sasse 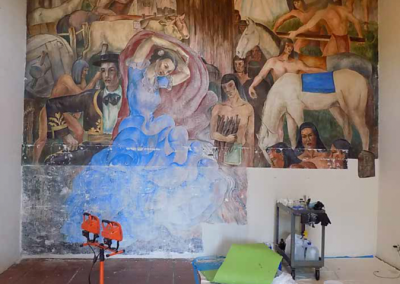 The fresco in the midst of prepping for restoration.

Black & White work on the fresco under way by the team of artists.

Thoughts on the Fresco at the Ramona Bowl Hemet, California

In thinking about the repair and conservation of the unique fresco located at the Ramona Bowl I find that first and foremost is the fact that an important piece of California art has been saved and preserved for future generations to enjoy. The art of fresco painting is not commonly seen in California or in the United States as a whole, being primarily a Europe an artistic method. Knowing very personally the commitment of those who believed in its conservation and the amount of work it took to achieve it, knowing that it is now fully conserved and ready to be shown to the public is of tremendous satisfaction.

But beyond its conservation, my personal excitement comes in seeing this incredible piece of art brought back to its full beauty because it is the combined work of both my father and my mother, who along with several other artists created the fresco. My father, Milford Zornes, provided the fresco expertise, managed and contributed to the project in 1942. One of the artists was his student Pat Palmer. Pat became Mrs. Milford Zornes at the end of the fresco’s completion. My mother was a fine artist and in looking at the fresco I could easily distinguish her work from the others. The fact that this art project was one in which both my parents participated is of extreme pride for me.

I am so pleased my parents had a chance to see the fresco and refresh their memory of working on it in a 2006 visit. I’m sure they would be proud of the work of their son-in-law, Hal Baker, in his determination to see it brought back to its original beauty and for all the work done by those of the Ramona Bowl administration, of photographer Gene Sasse and all the others who made it possible.

Lastly, I am so pleased that in wanting this art treasure saved and conserved that it also brought about much needed changes and upgrades to the Ramona Bowl itself. This venue is incredible in and of itself and all the upgrades it is now enjoying will give new life to its future ventures which will include a full view of the fresco.

The Sasse Museum of Art not only provides a place for local artists to show their work, but it has become a center for arts programming with a full schedule of exhibitions and art talks, visiting curators and collaborations with local universities the museum has become not only a place to see art but a producer of new ideas.

There is something about a museum that allows the individual to step outside of the worries and cares of the day; free their minds to embrace beauty and culture, and to broad- en their views through the work of the artist. The mission of the Sasse Museum of Art is to foster and to promote the study, appreciation and understanding of art through exhibits, education and publications.

We believe that art shows us many sides of the story of life.

To the Ramona Bowl Board and Staff and especially to Lori VanArsdale for all her work and determination to see this renovation project completed,

Gene Sasse, Sasse Museum of Art and photographer for all the photos, the friendship and wonderful support to Hal and Maria Baker to promote the renovation project,

Elisabetta Covizzi Perfetti –  art conservator working on the restoration of the fresco with amazing skill,

The Latham Estate and the Estate Trustee for providing the funding for the conservation of the fresco,

The Riverside Press Enterprise for their extensive media coverage,

Catherine McIntosh, Claremont Museum of Art and Cathy Ford for their support of the 2013 Fresco event at the Ramona Bowl,

Bill Anderson, Anderson Gallery and artist for his support and talk on Milford Zornes at the 2013 event,

Cathy Chambers, Librarian, Otis School of Art and Design who provided historical research on the fresco,

John Meanor – liaison for Hal and Maria Baker with the Ramona Bowl and close friend to the Bakers and friend of Milford Zornes.