Milford Zornes was born in 1908 in Camargo, Oklahoma. From an early age, he exhibited artistic talent. The drawing below, believed to be his sister, was created when Zornes was age 10. The attention to detail is amazing and demonstrated a commitment to his passion for art. 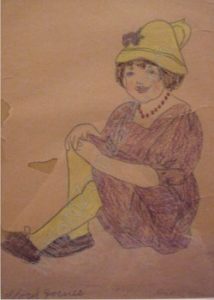 In 1928, 20-year-old Milford Zornes hitchhiked across America, worked on the docks of New York, and after earning his ticket, shipped out to tour Europe. After his return to America in the late 20’s or 30’s, Zornes settled in Los Angeles, studying art with F. Tolles Chamberlin and Millard Sheets.

By 1935, Zornes was receiving awards for his watercolors which he produced for the Public Works of Art Project. He was honored with a one-man show at the Corcoran Gallery of Art in Washington, D.C., and one of his watercolors was chosen by the Roosevelts to hang in the White House. He became president of the California Water Color Society.

Zornes was drafted into the Army after the outbreak of World War II, and assigned to be an official artist in the China-Burma-India Theater of Operation. Many of his watercolors and drawings became property of the U.S. Army and were sent to the Smithsonian after the war.

On January 26, 2008, at the Pasadena Museum of Art, Milford Zornes celebrated his 100th birthday where he held a 2 hour watercolor demonstration to celebrate his lifelong artistic career. He died less than a month later on February 24. After the war, Zornes settled in Claremont, California to paint, teach, and travel. In 1963, he purchased the former home and studio of Maynard Dixon in Mt. Carmel, Utah outside Zion National Park, to use as a location for regular watercolor workshops. Zornes was a much admired instructor, having taught at several institutions, including Pomona College, Otis Art Institute, and Pasadena School of Fine Arts. He invented a traveling classroom, taking his students to exotic destinations for his painting workshops, including China, Alaska, Mexico, Ireland, Italy, Spain, and Hawaii.